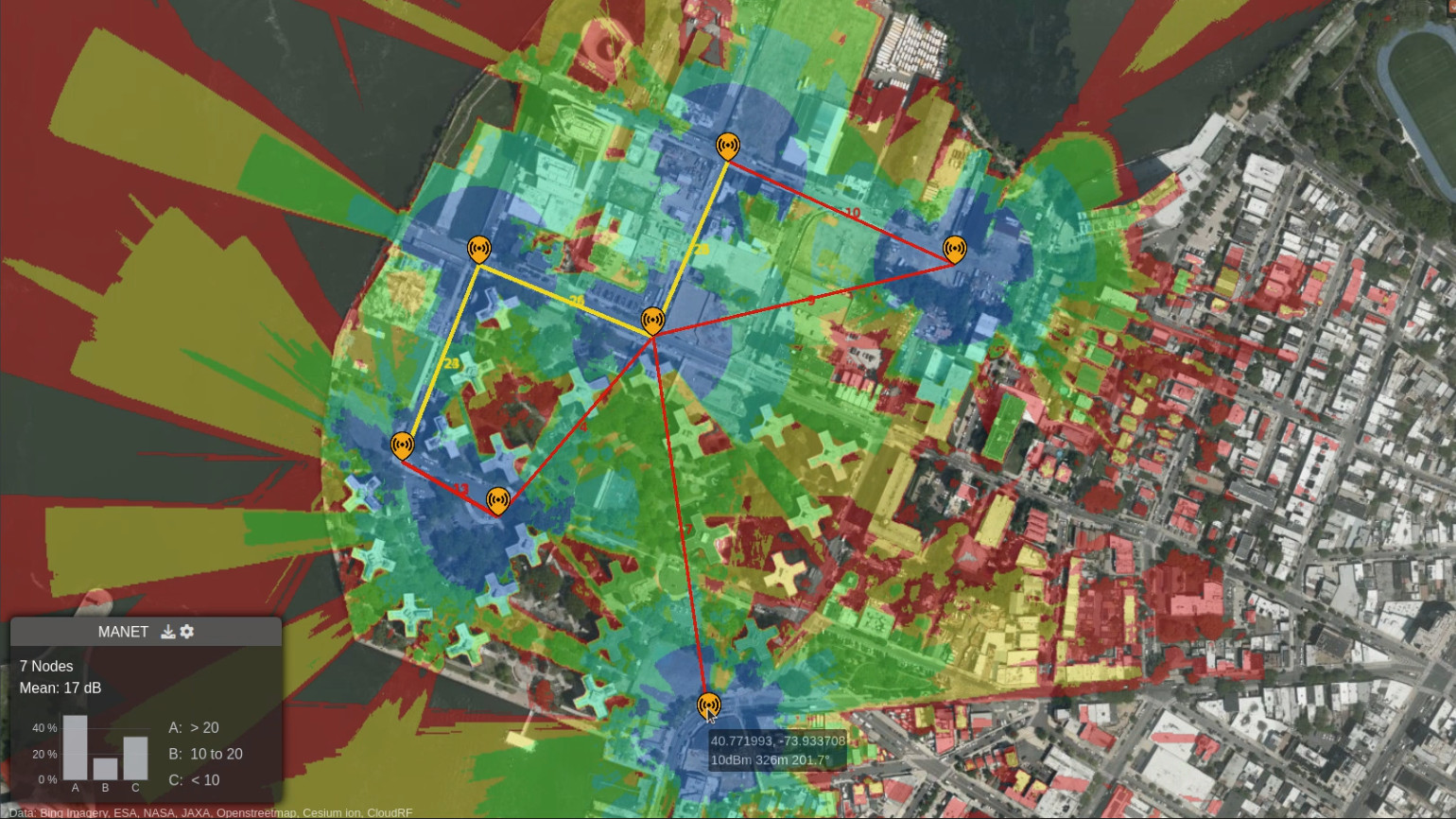 Today we have launched a new GPU accelerated API called “Multisite” which is capable of modelling hundreds of sites in the time we previously would have done one. This exponential increase in capability grew from our Best Site Analysis (BSA) capability which uses a Monte Carlo technique to test hundreds of random locations, and from the intermediate outputs, reduce them to reveal the optimal location(s) for radio communication.

The difference in Multisite is that the locations are not random, they are defined by the client.

A link is not coverage

Following customer feedback on our MANET planning tool which up until now created point-to-point links between nodes we investigated the feasibility of showing all the coverage, or in classic modelling terminology a point-to-multipoint aka a heatmap.

The reason this is important in MANET planning is you need to see the whole network coverage to understand where you are serving and where your gaps are. Links won’t show you coverage gaps unless it involves the node location so you will find out about these when it’s too late. Links are useful for seeing a network’s geometry and overall health but are of limited use for tactical RF planning where the network members are expected to be agile.

A bonus feature is that a heatmap scales better than links which get very cluttered in an interface when many overlap. A heatmap is much easier for a human to digest than a game of radio kerplunk which can overload an operator.

As this is GPU powered it is faster than the previous CPU powered link calculations. By removing the links, the view is less cluttered for busy networks and this can scale to a significant number of nodes in a single request.

During testing we were modelling 100 nodes in under 2 seconds, which includes communication latency to a production server in Europe. We achieved 3.1 seconds for 200 nodes at 10m resolution with 1km radius each and are confident we can do 500 nodes, like BSA does, and reduce the time further with infrastructure adjustments and a local server. Most of the delay is in data preparation and post processing, the actual computation is milliseconds so real-time modelling for multiple fast moving tracks is viable.

The heatmap exists in your archive as a standard layer so can be exported to KMZ, KML, GeoTIFF, SHP, URL or HTML via the normal archive functions.

In this early demo, MANET nodes are manually placed and adjusted. The coverage heatmap and links automatically update as nodes are added, removed or moved.

How do I enable the heatmap?

If you have a Gold account, open the MANET planning tool from the top bar then click the cog on the MANET window which appears. In the tools options, you can select either links, heatmap or both.

The capability is available in API and UI version 3.7.

A Gold subscription or a private server is required to use the MANET heatmap and/or the Multisite API which powers it.

This restriction does not apply to the MANET links and the points API which that uses.

A multisite request uses the same JSON structure and values as a area request only instead of a single transmitter object, it has an array of transmitters with no upper limit.

In this example, two MANET radios with 20MHz bandwidth in SNR mode are modelled together. The transmitters differ in location and power but the receiver, environment, model and output sections and common.

Now that we’ve published the API, the fun part of making interfaces for it has already started. The first of which is the enhancement to the MANET planning tool. Expect to see more interfaces and demos, at scale, shortly covering moving vehicles, large networks and ATAK integration where we plan to redefine the meaning of “radio check” with a whole network coverage map.

If you are an integrator or developer of a map and are interested in incorporating this unique layer, get in touch and save yourself years of R&D. White labeling options available.

Categories: API, Electronic Counter Measures (ECM), Modelling
We use cookies on our website to remember your preferences and repeat visits. By clicking “Accept”, you consent to the use of cookies.
Cookie settingsACCEPT
Manage consent