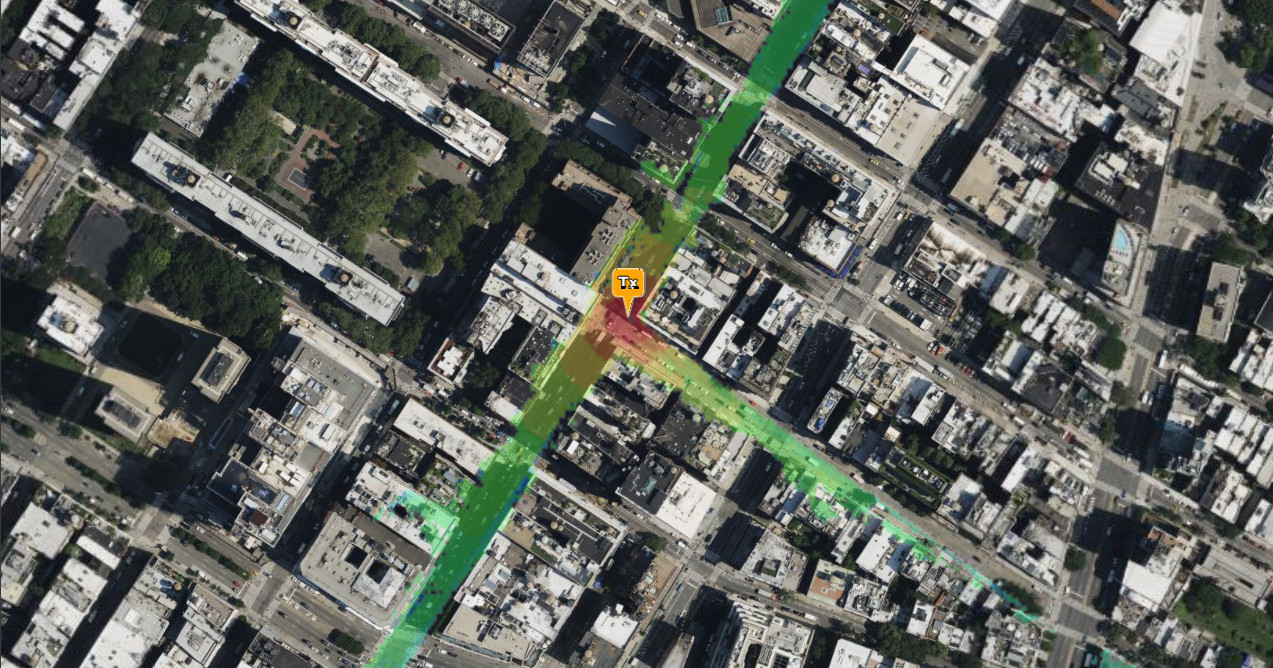 This blog is about modelling the RF propagation of a private LTE Band 48 (b48) “CBRS capable” base station.

Citizen Band Radio Service (CBRS) has exploded in popularity in the US since 2020 when the FCC allocated 150MHz of bandwidth from 3550 to 3700MHz for public use.

Keen to exploit this opportunity, businesses have marketed compatible LTE (4G) cellular equipment which some like Helium have chosen to label 5G. Unless it’s transmitting a 5G-NR waveform it’s not strictly “5G” but as it shares common components and small cell architecture its plausible and lucrative, to brand it such and most VCs aren’t experienced enough to understand the difference. Whether it’s morally or legally right will likely be determined in the next year with a test case.

One of the market leaders is Chinese firm, Baicells, who like any radio manufacturer have a public listing of FCC approve LTE base stations. This listing includes details needed to precisely model the propagation for these LTE base stations.

FCC has two tiers of power for these private eNodeBs: Category A which is the most conservative at only 1 Watt / 30dBm of power (EIRP) and 10MHz of bandwidth and Category B which offers a generous 50 Watts / 47dBm and 10Mhz of bandwidth.

This unit supports both FCC power categories and LTE bands 41 and 48 making it popular in the US market. Using the datasheets here we’ve modelled it in an urban environment in New York City.

For comparison, we’ve run each model twice with Cat A and Cat B power limits and 10MHz of bandwidth. Adding a high gain antenna would indeed increase the range but the total Effective Isotropic Radiated Power (EIRP) of the combined system cannot exceed the category limit. To do so would not only be in violation of your CBRS licence but would be illegal.

Spectrum monitoring of the CBRS band is routinely conducted and with the magic of Physics, violators can be passively detected and rapidly geo-located. The largest customer for geo-location market leader CRFS is the US Federal Government.

The eNodeB was 3m above the ground/roof and the receiver was 1m from the ground with 1dBi gain and a threshold of -120dBm RSRP – the limit for LTE.

The model used was the Irregular Terrain Model with a reliability of 99% to account for the increased urban noise.

On the street – Cat A

With Cat A limits the effective range observed was a modest 200 to 300m where there was line of sight. Little better than a domestic WiFi router due to the high path loss present at 3700MHz. Where buildings were obstructing the signal, no coverage was achieved due to their attenuation of the low power signal.

This modelling is more optimistic than the 100m field measurements conducted on live cells in NYC but more conservative than the 1km hexagons found on Helium explorer.

Taking the same 3m mast to a rooftop bar nearby on Broadway to impress VCs we improve the range by up to 100% as expected but also lose local coverage down on the street due to the urban canyons. We’re still below 400m effective range in most directions.

Cranking the power up to the full 5W makes very little difference if you don’t have line of sight. We’ve improved signal at the places we could already reach but are unable to penetrate new locations. We’re still below 400m effective range in most directions. Some distant rooftops at 600m are touched.

Finally we placed the eNodeB on the Empire State Building at 400m above the city with 10 watts(!) of power. The range was then measured in kilometers but not many. The effective coverage was 2-3km and then only to rooftops – not at street level.