byCloudRF
You are here:
< All Topics

The service uses a variety of terrain data ranging in resolution from 2m to 30m.

The API will let you request any resolution you like but the accuracy of the output will be limited to the maximum resolution of the selected country.

For example, in the UK there is 2m LiDAR for England and Wales and 30m DSM for Scotland. You can request 10m resolution anywhere but in England this will be sub-sampling high resolution 2m LiDAR to 10m and in Scotland it will be super-sampling 30m DSM to make 10m.

The engine SLEIPNIRTM accepts multi-resolution inputs so will work with patchy high resolution LiDAR which might come from photogrammetry and backfill voids with the 30m DSM to create a seamless digital model.

The baseline 30m data for Earth is sourced from the Japanese Space Agency, circa 2014. It’s a Digital Surface Model (DSM) which includes forests and large buildings > 30m.

LiDAR data for cities and countries is typically sourced by user request from national geographic agencies such as Kartvekat in Norway or the Environmental Agency in the UK. Where high resolution city data is needed but not available we can source 5m DSM from a commercial supplier but this is expensive and slow to procure. For cities, we recommend using 3D clutter instead which is quicker to add to the system, can be self generated and produces more accurate coverage than a solid surface model.

Global coverage up to 60N is provided by ALOS global digital surface model © JAXA. It was created in 2014 and has a resolution of 30m.
http://www.eorc.jaxa.jp/ALOS/en/aw3d30/index.htm

High altitude regions such as Greenland, Northern Norway and the Svalbard islands have been created at 90m resolution from mapping by Jonathan de Ferranti http://viewfinderpanoramas.org/

Options for terrain data for RF planning are increasing rapidly with the advent of drones. Gone are the days of waiting for the next release of space based Government data like the 2000 space shuttle mission whose coarse yet global SRTM data powers many RF planning tools – including CloudRF. Recently LIDAR is a growing source of data which we’re pleased to support but If you don’t have access to public LIDAR for your region your other option is to pay a small fortune for a simple file which is just a list of numbers from a commercial company. Commercial high resolution models have always been very expensive but this development will change that. Enter drone photogrammetry. It’s the process of converting images into digital models and with software like Pix4D you can do it all yourself. The resolutions possible exceed LIDAR in many cases and the future of the data is bright as it will evolve in line with the evolving mega-pixel capability of a digital camera.

A CloudRF customer used a drone and Pix4D software to collect imagery to create a surface model. The tile generated had an original accuracy of approximately 10cm which was re-sampled to 1m to produce a smaller file and re-projected to WGS84 projection. 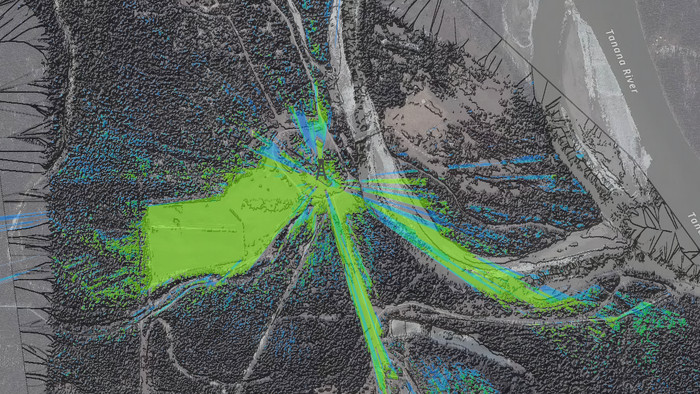 To create your own high resolution tiles from imagery, we recommend the Pix4D software and support forum at https://support.pix4d.com. Your tile needs to have the following properties: