Long Term Evolution (LTE) / 4G uses advanced waveforms and dynamic antennas to deliver the latest in mobile data. Despite the seemingly new technologies, it is still bound by the laws of physics and RF propagation so propagation can be modelled effectively using existing algorithms. Many academic papers have compared legacy models to find the best fit and all have concluded there is no single best model!

The reason you won't find a 'LTE propagation model' is LTE covers frequencies from 400 up to 3800MHz which covers most of the UHF RF spectrum. This spectrum is served by many different cellular models eg. Okumura-Hata, COST231, SUI so where one model may be the best fit for a given LTE band toward the low end (Band 17, 700MHz), it will not be the best choice for another band at the high end (Band 41, 2600MHz).

LTE antennas are some of the most advanced commercial antennas available offering multiple, steerable, beams. The RFS TD-LTE Cross polarized antenna for band 41 (2490-2690MHz) is a good example. Subscribers associate with the cell tower through it's wideband broadcast beam(s), and are then served through the narrower beam width service beams of which there are many. 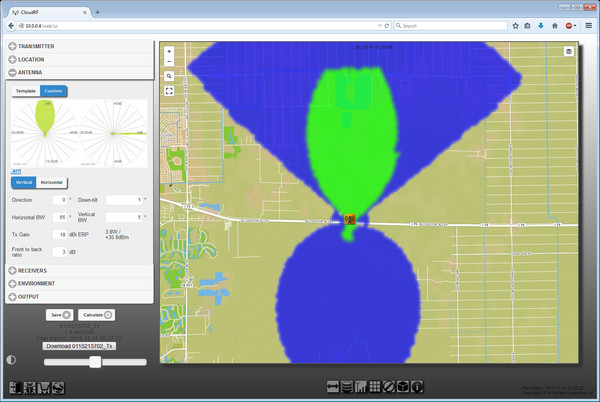 This screenshot shows a MIMO panel modelled with 2500MHz and a 65 degree horizontal beamwidth and 5 degree vertical beamwidth. Here the free space path loss model has been used to demonstrate the (optimistic) coverage without factoring in terrain obstructions.

To represent a typical cell site with 3 panels at 120 degree intervals, a python script has been written to create a super pattern composed of 3 rotated patterns. The cell site pattern can then be uploaded back into the system and used again with the result below. 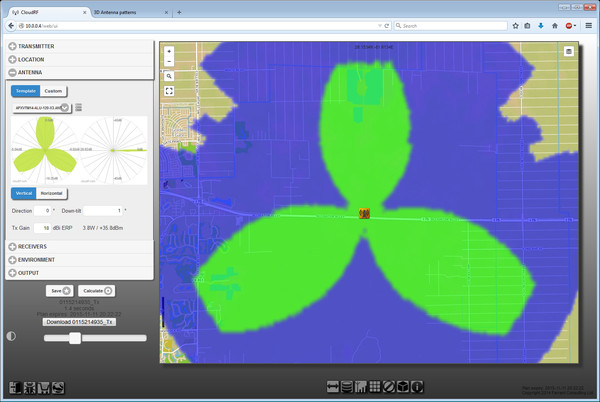 Finally, to visualise the coverage with an established model and terrain data, the Irregular Terrain Model was chosen. The LTE band 41 (2.5GHz) is challenging as it is beyond most popular cellular models (Okumura-Hata stops at 1.5GHz, The COST231 extension stops at 2GHz) whereas The ITM model is valid up to 20GHz. 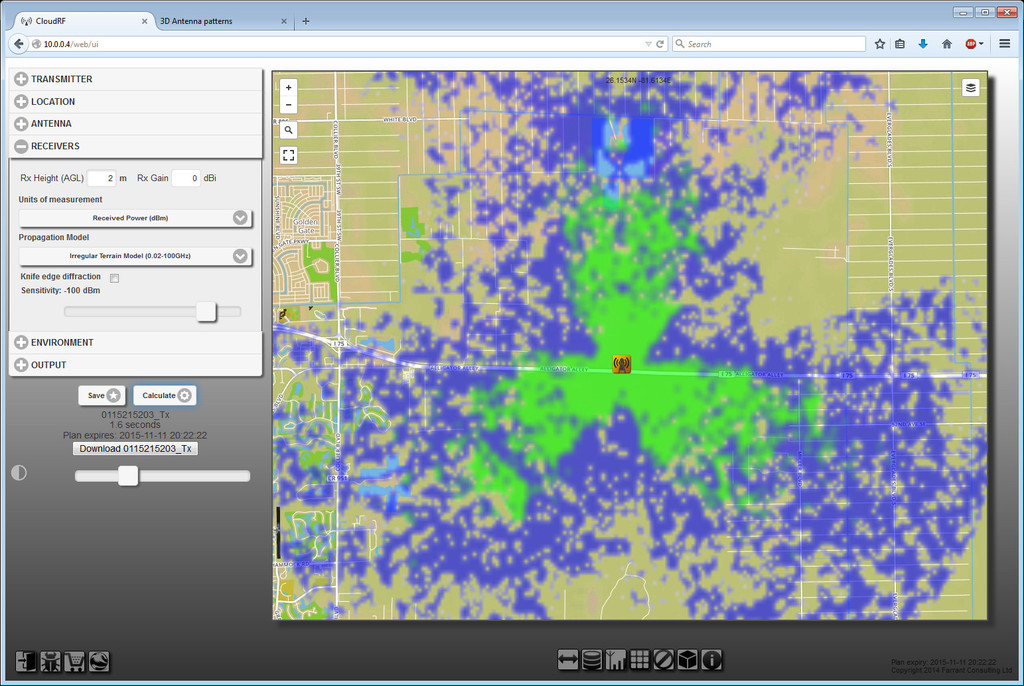 The end result offers a much more realistic and conservative prediction. The prediction can be refined further with the manipulation of environmental, gain and clutter variables.

It should be noted that these RF predictions only relate to theoretical coverage of LTE and do not give any indication of LTE capacity, spped or Quality of Service (QoS) which requires additional calculations based on population density and other service parameters.

We accept all major credit cards, as well as a number of other ways to pay.